The Different Types of Drones Explained 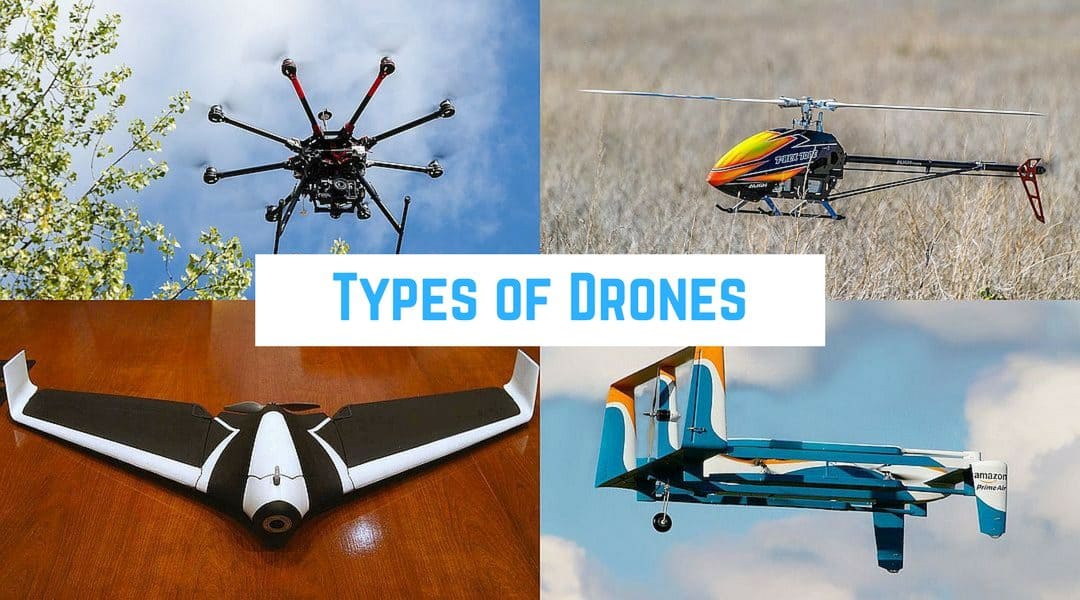 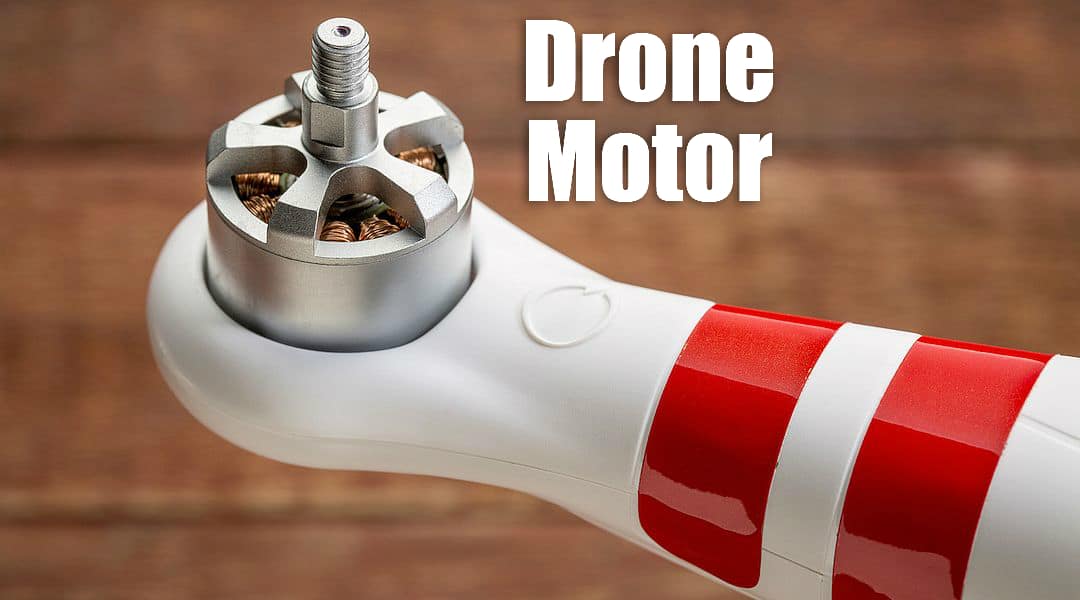 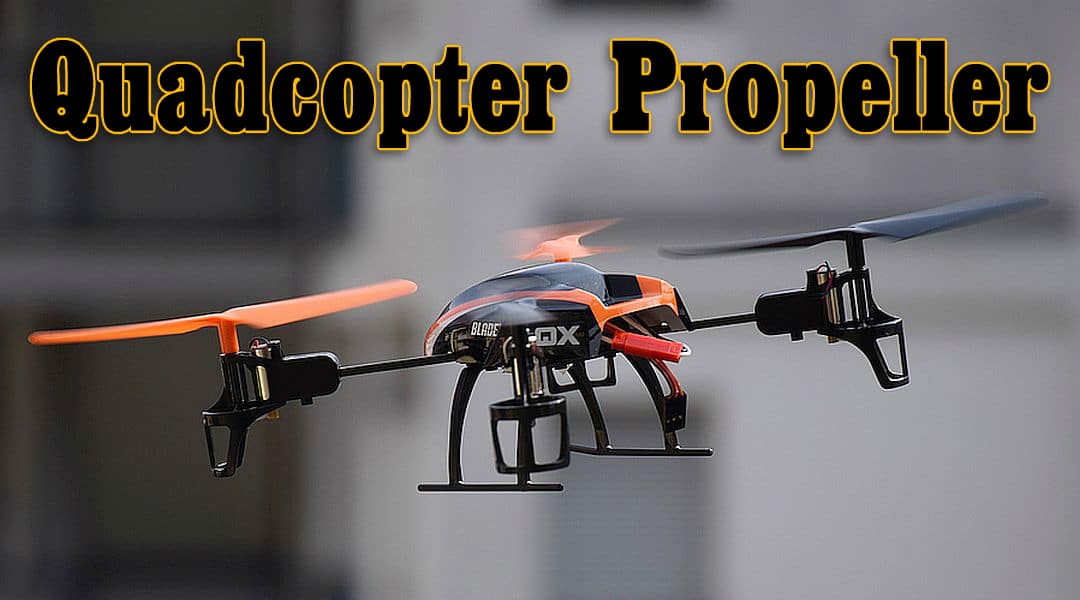 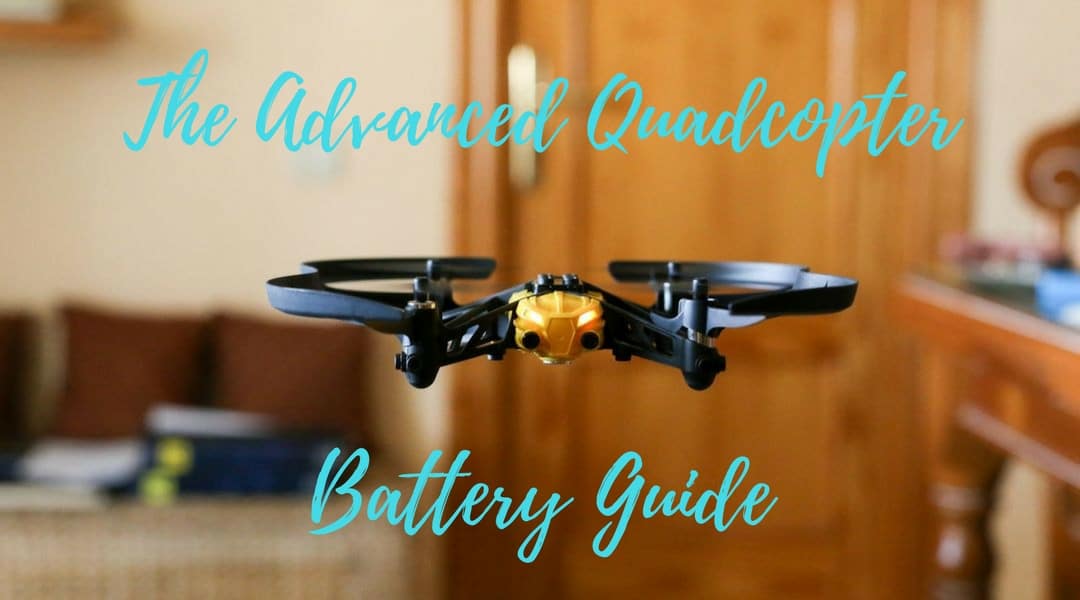 The aim of this article is to provide an overview of the different types of drones that are currently in use, some of their technical specifications, and applications. Drone technology is rapidly evolving, but the main aspects of propulsion, autonomy, and size will remain important even in the next generation of drones.

The main classes of drones include multirotor, fixed wing, single rotor and hybrid designs. The type of technology used to keep the drone flying determines the type of drone. This is also the main contributor to how the drone looks.

Multirotor drones are the most popular types of drones that are used by hobbyists and professionals. Common applications of are but include aerial photography, video surveillance and surveying to name a few.

If you are looking to get a small camera in the air for a relatively short period of time, then a multirotor is the way to go. They give you much more control over positioning and framing the camera to get you that perfect aerial photo shot.

The financial barrier to entry in the multirotor market is low thanks to the advancement of cell phone technology that has allowed the price of drone components to become ignorantly smaller and cheaper. Out of the four types of drones that are available, are the easiest to and the most economical to fly.

Multirotors can be further classified based on the number of rotors on the aerial platform. Tricopters have 3 rotors, quadcopters have 4 rotors, hexacopters have 6 rotors and octocopters have 8 rotors. Quadcopters are the most popular and widely used.

Multirotors do have their downsides. The major constraint is the limited flying time, reduced endurance, and speed. They are not suited for long distance surveying applications, mapping, or inspection. The main issue here is that most of the energy, usually from a battery source, is used to maintain the drone in a stable flying position. multi rotors are only capable of maximum flying times of 20 to 30 minutes with a minimal payload. 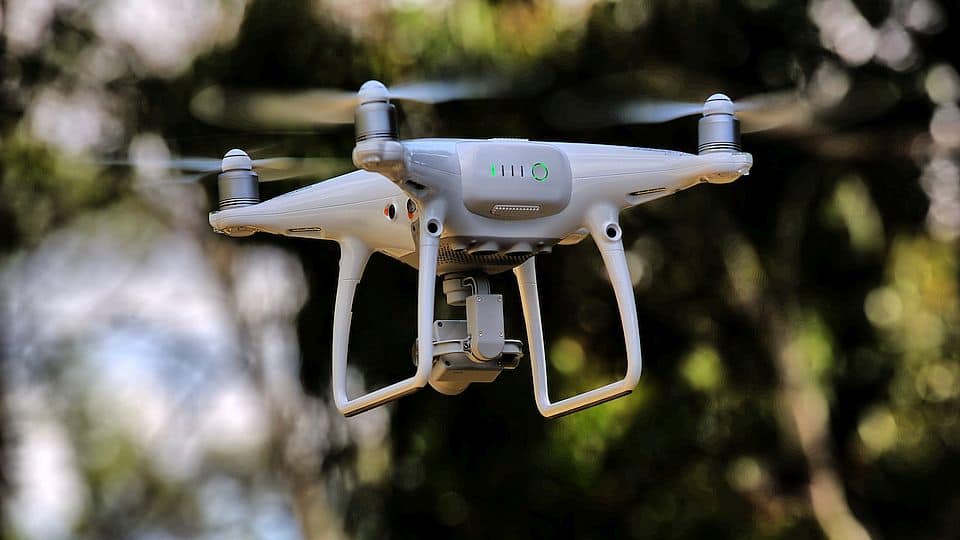 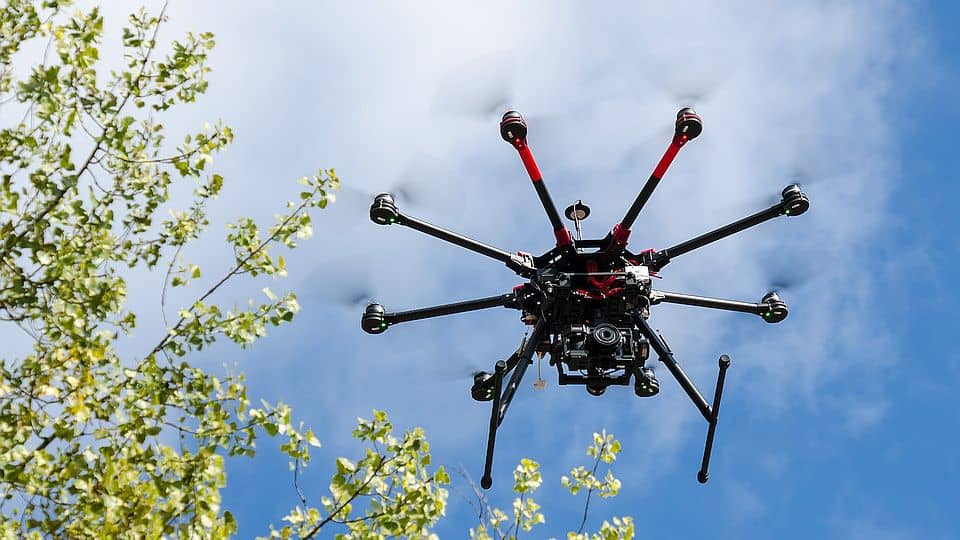 Fixed wing drones are one of the types of drones that use the same principle that airplanes use to generate lift using a wing instead of generating rotors. The vertical lift is generated as a consequence of the forward motion of the wing through the air, making this a more efficient way of generating vertical lift.

The main drawback of fixed wing aircraft is their inability to loiter over one point of interest, which rules them out for taking aerial photos and videos. Launching and landing drones can also be problematic. To get them in the air, you need a runway or a catapult. To recover the drone, you will need a runway, parachute, or net to recover them safely. Only very small drones are suitable for launching by hand, or belly landing in an open field.

Fixed wing drones are costlier to fly, and more difficult to learn how to fly. have become widespread because they are easier to and easier to learn how to fly. This is not the case for drones. You will need to have a basic understanding of flight dynamics to take off, fly to the designated waypoints, and then land safely.

With a fixed wing, the image generation is not a simple task as pointing and shooting an image with the camera. You will have acquired hundreds of thousands of images during the flight that to be stitched together to generate the final tiled image. 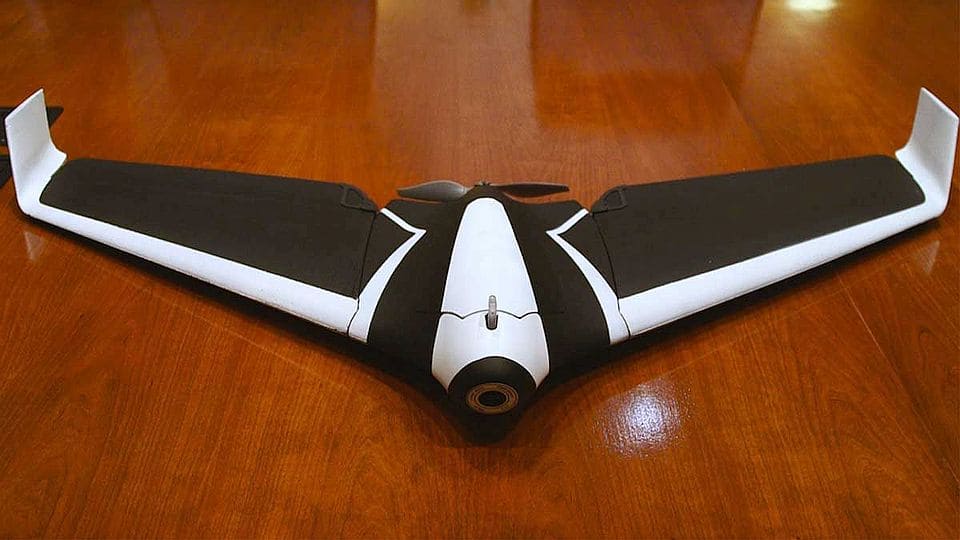 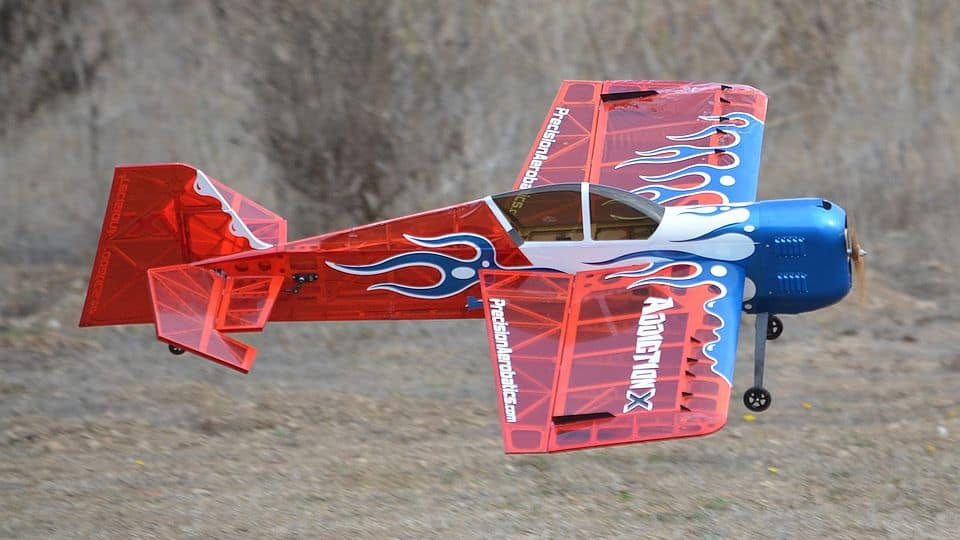 A uses a number of rotors to generate vertical, but a single rotor uses just one, along with a tail rotor to control the heading. Helicopters are very common in manned but are rarely used in the drone community.

Single rotor helicopter drones generate thrust more efficiently over and can be powered by a gasoline engine for longer flight times. A larger rotor spinning slowly generates thrust more efficiently. This is why long endurance quadcopters have a large propeller diameter. A single rotor helicopter with long blades is more like a rotating wing than a propeller. This results in the greater thrust generating efficiency.

If the application requires hovering a large payload, such as a LIDAR scanner, or you need a combination of long endurance with flight, then a single rotor helicopter drone is perfect.

There is the drawback of the increased complexity, cost, vibration, and danger of large spinning blades. Extra care needs to be taken to prevent any injury caused by the spinning rotor.

With regards to of flying, a single rotor helicopter is somewhere between a multi-rotor and a aircraft. Hovering a helicopter drone over a given spot is relatively simple, and the forward flight skills can be learned as you go. But helicopter drones are not as stable while flying, and requires good skills to keep it in the air. They also require more mechanical maintenance due to their increased complexity. 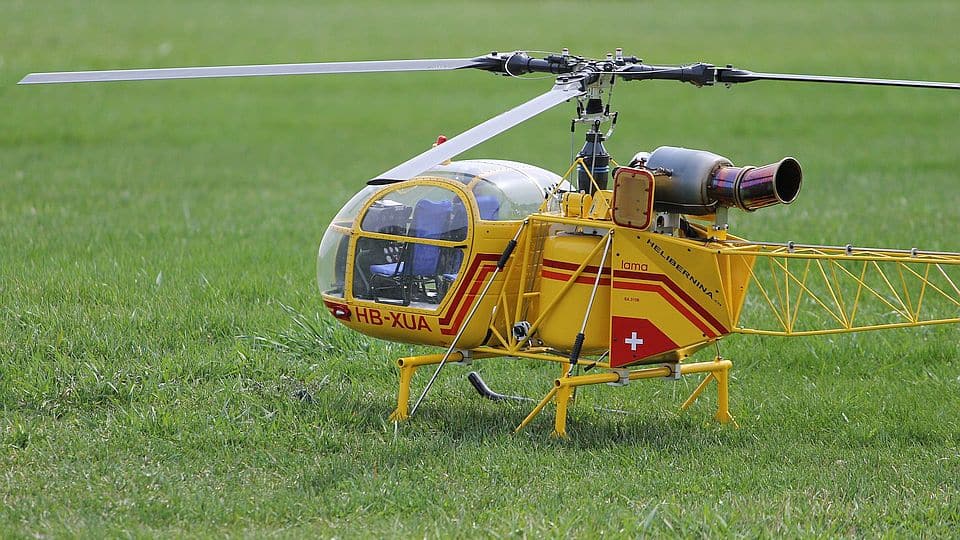 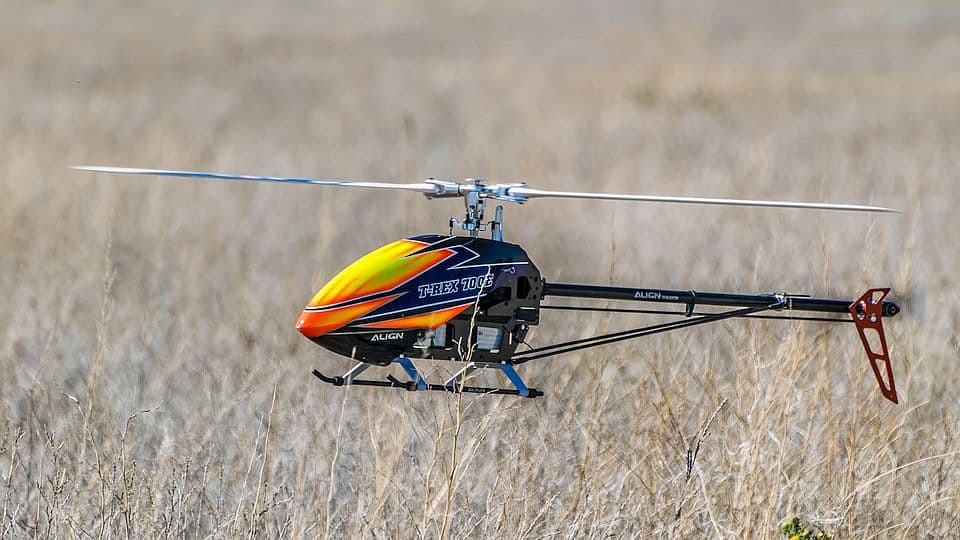 A new category of hybrid drones that can take off and land vertically are being developed. These merge the benefits of UAVs with the ability to hover.

Some of these hybrid drone concepts are essentially designs with a vertical lift motor. Other designs are tail sitting aircraft that point for takeoff before pitching over to fly horizontally. Further designs feature the rotor or the entire wing with propellers can point upwards for takeoff, and horizontally for flight.

Some of these design configurations were tried in the 1950s and 1960s for manned but were deemed too complex and difficult to fly. Many of the test flight ended disastrous results. The advancement of modern flight and advanced sensors, the task of flying these types of drones can be taken on by the computer.

Currently, there are only a handful of hybrid fixed wings available on the market. However, you can expect to see more of these types of designs as the technology gets advanced. One example of this type of is Amazon’s Prime Air delivery drone. 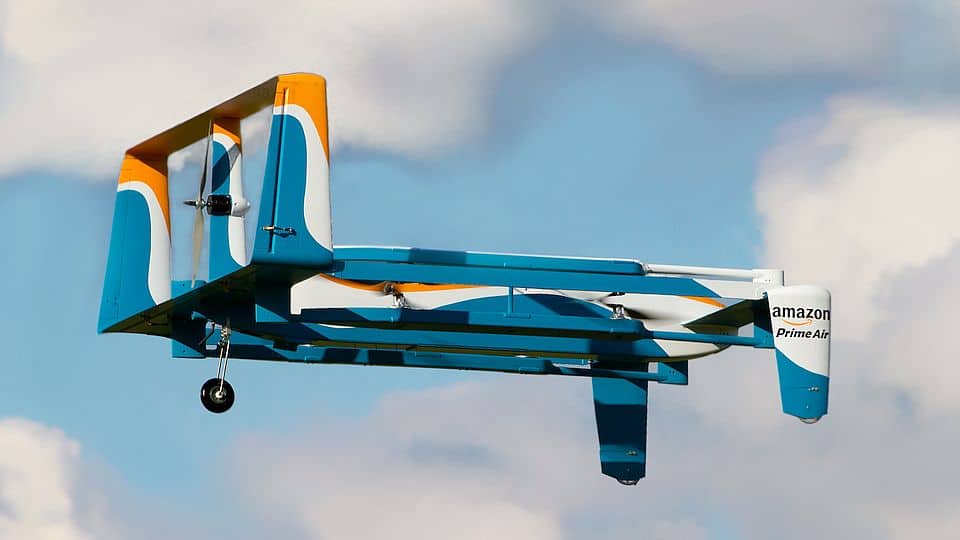 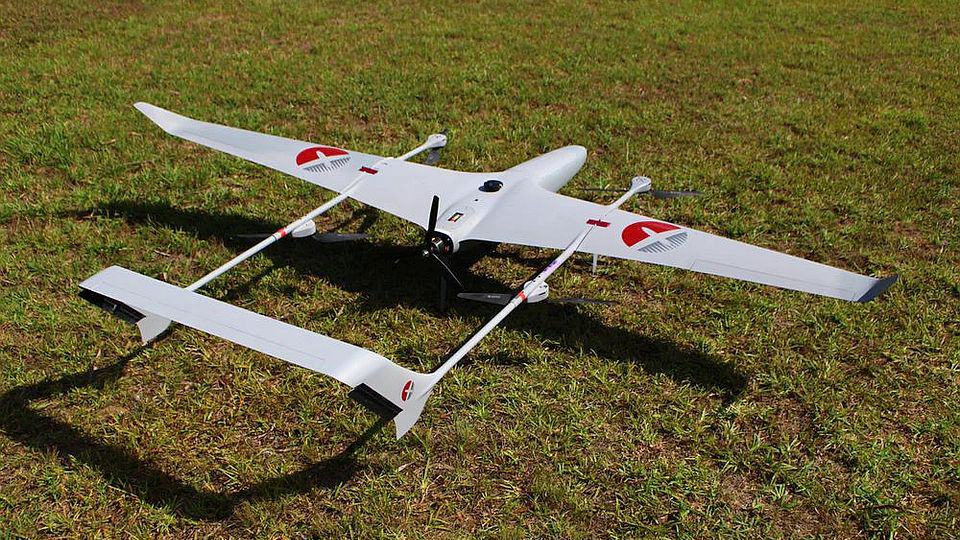 Since drones do not carry a pilot on the aerial platform, they need to have a certain level of autonomy. There is a distinction to be made between an automatic and an autonomous system. An automatic system is fully pre-programmed that can execute the programmed task on its own. Automation also includes additional aspects such as automatic flight stabilization.

Autonomous systems can deal with unexpected situations by using preprogrammed rules to decide up a course of action. Automatic systems do not have this freedom of choice.

The design of the drones described previously are dependent upon the energy source that is to be used. The fuel sources currently available for drones are traditional airplane fuel, battery cells, and fuel cells. Airplane fuel, such as kerosene, is mainly used for drones. The military Predator drone is one such example of these types of drones. The US army used these and equips them with different sensors, and ammunition.

Lithium polymer batteries are usually used on smaller multirotor drones. These drones have a shorter range, and smaller operating time than drones. Recreational use is a common application for these drones, making it practical to use rechargeable batteries. The Phantom 4 and Hubsan X4 are an example of these types of drones.

A fuel cell works on the of converting the chemical energy of a fuel directly into electrical energy. Fuel cells are highly efficient and environmentally friendly. Fuel cells are rarely used in drones due to their high but can be equipped drones. Longer flying times on the order of multiple hours can be realized by using fuel cells.

The Future of Drones

Drone technology is constantly evolving in the areas of miniaturization, autonomy, and swarms. Miniaturization is the most incremental developments of these three areas. Each new generation of drones is a bit smaller, lighter, and cheaper than the previous generation. For example, the development of new materials, along with more efficient and lighter batteries allow for better trade-offs between the drone’s flying range, maximum altitude, and payload capacity. The smallest drone currently available is the size of a credit card. However, in a few we can expect to see drones the size of insects.

The falling prices and size of drones will help in making them more readily available to everyone. it is rare to see a drone flying, but within a few there will be plenty of drones available in the public market. This prediction is based on the rate at which drones are being manufactured and sold. Quadcopters are highly popular Christmas and birthday presents for teenagers. They are also favored by and sports enthusiasts. Also, there is an increasing number of companies that make drone services available.

Furthering drone autonomy is making many applications more plausible. The first generation of drones no more than aircraft, but now there are smart autonomous modes that reduce the amount of interaction and control needed by the human pilot. Professional grade drones now feature the ability to pre-program flights, and software flight stabilization. In the future, we will see more drones that feature GPS navigation, collision avoidance capabilities, and being able to adapt to changing weather conditions.

Drones that can act in a cooperative manner can exhibit swarm behavior. The development of swarms can enhance the range, flight duration, and payload capacity for different applications. For example, if one drone is experiencing a low battery level, it can assign its task to another drone. This could extend the flight range beyond the range of the first drone. Heavier payloads could be carried by multiple drones, which would allow exceeding the payload capacity of one drone.

multi-rotors are getting most of the attention in the drone community. However, if you have a niche application, then you may want to consider using a fixed wing, or even a single rotor drone to tackle the job. this article has given you a better idea of the different types of drones currently available to you.